Designer Tammy Kalinsky completed the project as her senior thesis, on behalf of a friend with cerebal palsey.

Design students need to learn a lot in four years—market research, concept development, and prototyping—to name a few skills. However, empathy is one of the trickiest to pick up. Designer Tammy Kalinsky’s senior thesis, a wheelchair accessory called Side by Side, manages to unify all these topics and brings a much needed burst of innovation and support to people with special needs. With a bar on the side of the wheelchair, the person in the chair and the one pushing are able to actually talk.

Kalinsky had her first course in compassion at age 12 when her parents moved her from Israel to Toronto. It was a culture shock in more ways than one. Her biggest challenge came when students in her class were paired with first graders to help teach reading. “Since my English wasn’t that great, my teacher and principal had the amazing idea of letting me teach a first grader with Down’s syndrome,” says Kalinsky. “Since he couldn’t speak, read, or write, and neither could I, we found our own way of communicating.”

The experience had a profound impact on the budding designer. Years later when she attended the Holon Institute of Technology, she started working with a girl suffering from cerebral palsy. The girl, Sapir, is typically happy and outgoing. Kalinksy noticed a change when pushing her. The wheelchair creates an awkward social dynamic where she can’t make eye contact or carry on a normal conversation. Kalinsky saw an opportunity in this awkwardness.

Side by Side is a deceptively simple design. Making the chair move in a straight line, without spinning in a circle was the first test of her skills. Kalinsky placed the bar near the front of the chair and angling it slightly to properly direct the force. As a result, this facilitated communication between the rider and aide.

Solving the geometry problem was easy enough, but convincing parents and therapists to trust the work of a design student was trickier. They wanted something that looked safe and reliable, but Kalinsky’s goal was to make the product reflect the youth and vigor of its user, not the cold, sterile look common to most medical devices. “That’s when I turned to the world of children’s bicycles, a very colorful and happy world,” says Kalinsky. “But at the same time very secure and familiar for the parents.” 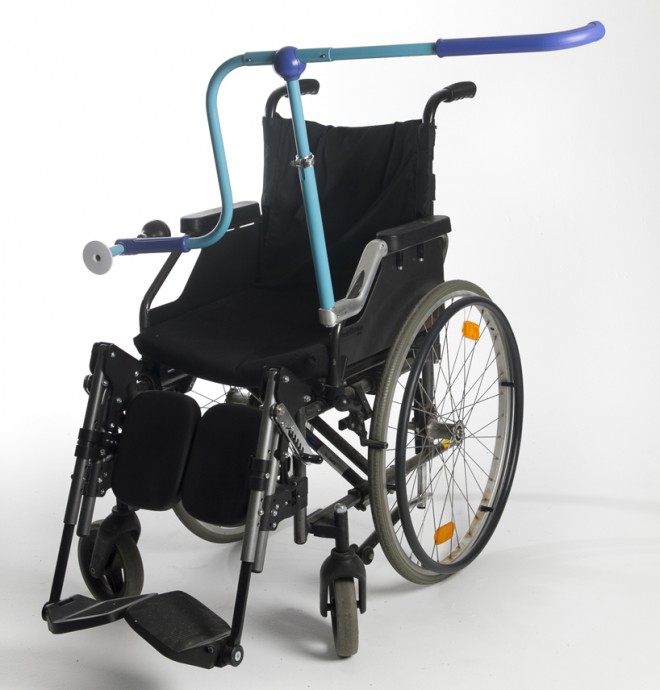 Convincing parents to trust the work of a design student was tricky.

Kalinsky was also keen to give the riders, who often are dealing with severe physical or mental challenges, an easy way to interact with their environment. Again, she turned to the bicycle for inspiration. She mashed up a bicycle horn and headlight to create a device that squeaks when squeezed and lights up when slapped.

This lets the rider interact with the world while honing their motor skills at the same time. “Some of the kids can’t verbally communicate,” she says. “But they all have the need to communicate and it’s up to us to give them the means to do so.”

Side by Side also demonstrates a lot of textbook industrial design thinking. Unlike many student concepts, the product is easy to manufacture using traditional processes. Ergonomic affordances like rubber grips and a simple folding mechanism help reduce the physical burden and the use of hollow metal tubing make the design light and and affordable.

Kalinsky has filed a patent on her slick steering solution and is getting ready to roll it to market. Now all she needs is a little help from investors for the final push.