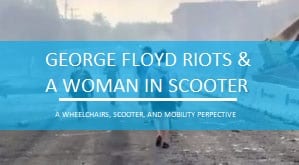 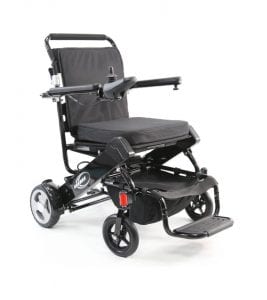 It was reported by the Daily News that this lady was out intentionally hurting others.

A woman in a wheelchair was pushed, punched and sprayed with a fire extinguisher after being accused of “stabbing people” outside a Target store in Minneapolis during Wednesday night’s chaotic protest over the death of George Floyd.

Conflicting accounts on social media described her both as a disabled woman who was trying to block looters from breaking into the store and as a violent assailant who was armed with a knife and threatening to hurt protesters. 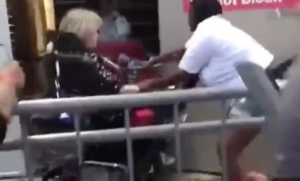 Many of the videos shown on twitter and many other social media platforms identify an out of control situation.  Many hurt and many in chao's.

Most mobility impaired individuals requiring a wheelchair, scooter, or mobility device typically are not able to put others in danger.

She was reported to have had a grudge with one of "African American" workers at the local shot looters went to town with an intention to steal and gain from the riots.  It can be seen in the video that she had a significant disadvantage with her mobility being impaired through being confined to a power scooter. . Another video does show that she is able to walk, however, it's not determined whether that was just temporary.

Please email us at: editor@karmanhealthcare.com