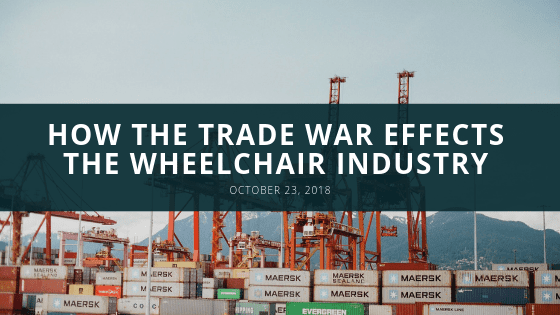 The Trade War between the U.S. and China can affect the wheelchair industry and their consumers. The cost of wheelchairs may rise should the current trade war continue.

Companies acquire expenses when importing raw materials such as metal which they have to pay tariffs on. Another expense adds on when exporting in form of other countries collecting tariffs on those goods.

What is Trade War?

The trade war began back in July when the U.S. increased tariffs to 25% on $34 billion of Chinese imports. Beijing then retaliated by increasing their own tariffs on $16 billion of U.S. goods according to CNBC.

China has announced that they will retaliate to the U.S.’ tariffs with their own tariffs on U.S. good and imports. According to Business Insider, 5,207 of U.S. products has been affected by China’s tariffs. China’s announcement also included tariffs on $100 billion of U.S. products.

The Effects on Medical Equipment and Supplies

Hospital IT executives are monitoring these developments closely. Further tariffs could bring higher prices on everyday technologies. While companies have contracts with specific suppliers, contracts typically only last 1-3 years. When current contracts with suppliers expire, the tariffs could increase prices on everything from medical devices, parts, batteries, and scientific equipment.

Countries that are affected by the U.S. tariffs include China, Canada and most of Europe.

President Trump’s planned tariffs would levy a tax of 25% on imported steel and 10% on imported aluminum. These tariffs will cause companies to increase prices because their raw materials go up in price and when exported to other countries an additional charge is to be paid therefore forcing companies to raise prices to meet profit margins which affect the consumers at the end of it all.

How will this affect the Wheelchair Industry?

This will cause a major impact in the wheelchair industry because metals and technology equipment prices will continue to increase leaving manufacturers no choice but to increase prices on the product to be able to stay in business and have funds to run effectively. The steel and aluminum tariffs have already prompted lobbying from countries, trade groups, and corporations. However, business leaders worry that President Trump will set off trade wars with other countries by imposing stiff and sweeping tariffs.

From the consumer’s standpoint, you should be prepared to spend more. While the current climate of the Trade War is still relatively calm and hasn’t affected the wheelchair industry too badly, it is important to keep in mind that there is a strong possibility of increased prices. As prices of steel, aluminum, and even tires are raised, so will consumer prices.