A newborn died after medics failed to notice he had already been born. The baby boy was dragged across the floor by his own umbilical cord while the mother was rushed for surgery.

Shang Shao was only seven months pregnant when her water broke. The 45-year old was already in labour when she was immediately rushed to a hospital in Luoyang City, in central China’s Henan province. Shang was advised by a doctor to undergo caesarean operation, so she was immediately put on a wheelchair and medics ushered her to the emergency room for surgery.

However, unbeknownst to the nurses Shang had already given birth and the baby had fallen off under Shang’s wheelchair. The newborn was reportedly still attached to his mother through his umbilical cord. 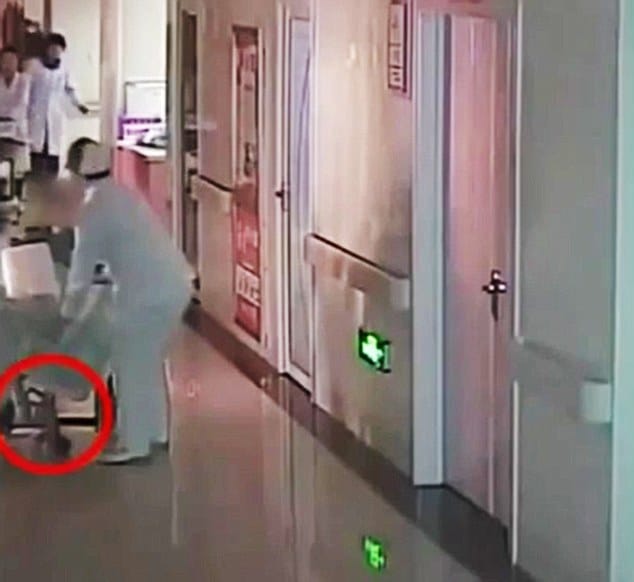 According to Mirror UK, CCTV footage captured the moment the baby boy was dragged by his own umbilical cord across the floor in the hospital as the unsuspecting nurses continue to push Shang’s wheelchair. It was only when hospital staff noticed the trail of blood coming from under the wheelchair did they realize the baby’s presence.

Nurses immediately saw the baby under Shang’s wheelchair and took him to intensive care. However, a hospital spokesperson confirmed the baby “died soon after of intracranial hematomas, a rupturing of a blood vessel between the skull and the brain.” The CCTV screen grab and video posted by Mail Online shows the baby falling head first to the floor under Shang’s wheelchair.