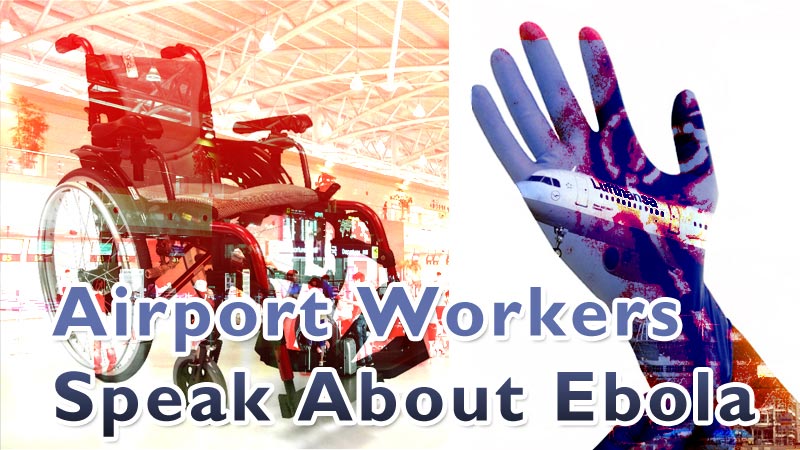 There are many reasons not to panic about Ebola. Medical experts have declared the chance of a mass outbreak in the US is negligible, often vastly overstated by politicians and media sensationalism.

But if you work at one of the international airports charged with conducting the government's new Ebola screening program, while you may not have reason to panic, you do have a reason to be angry. Many low-wage airport service workers are protesting what they see as an urgent unmet need for upgraded safety and health protections.

The New York Committee for Occupational Safety and Health (NYCOSH)recently surveyed workers at Kennedy and LaGuardia airports and found that workers suffered regular exposure to toxic chemicals, unsafe working conditions, and insufficient protective equipment and training. Airline terminal and cabin cleaners, along with wheelchair attendants who aid passengers with disabilities, often come into direct contact with bodily fluids and waste and chemical irritants, without adequate safety protection or training.

In response to Ebola concerns, Delta cleaning contractor Air Serv has issued a statement claiming it had updated its safety protocols for Ebola-related hazards the previous week, and that “We continually review our policies and procedures for updates and enhancements, and communicate updates to employees, as necessary.”

But last Wednesday, 200 Air Serv workers communicated their own concerns by walking off the job in protest. Though La Guardia, which handles mostly domestic flights, did not see significant disruptions in service, workers and advocates with SEIU 32BJ seized the ebola panic as an opportunity to raise awareness of the day-to-day occupational hazards they face. The airport workforce of some 12,000 workers across the New York region typically earn low wages under various subcontracting firms, without union representation. Many are now campaigning to organize with SEIU.

“We have to deal with vomit; we get insufficient materials to work like gloves that break; we deal with strong chemicals and waste that can cause damage,” said Air Serv Cabin Cleaner Antonia Alvarado in a statement. “As workers we deserve better treatment and quality of life."

Although passengers aren't usually at risk of encountering bloodborne pathogens during a flight, NYCOSH found that “Not one of the wheelchair attendants that NYCOSH interviewed was provided with disposable gloves by the employer, despite being required to physically touch passengers and sometimes coming into contact with blood or other potentially infectious bodily fluids.”

Some terminal cleaners and wheelchair attendants said they had not been trained on handling these exposures, which could include risk of Ebola, hepatitis B and HIV infection.

One surveyed wheelchair attendant described inadequate protections when dealing with sick passengers. “They tell us that we can’t use gloves [when we push the wheelchairs] because the passenger will feel embarrassed. But what about our health?”