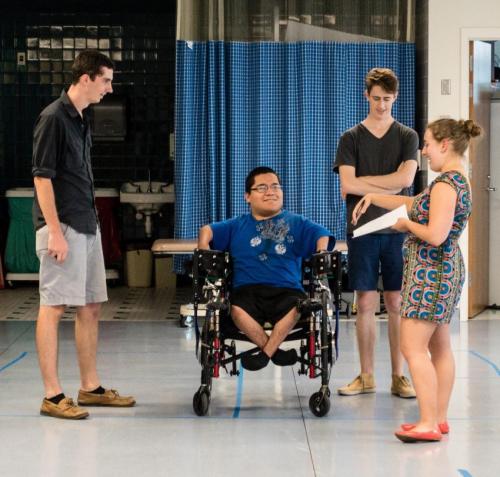 Rice University students have built a unique wheelchair for a Houston teenager who will now be able to row his way forward.

Pedro, 15, a patient at Shriners Hospital for Children, Houston, has had arthrogryposis since birth. This congenital disorder causes severe limitation of movement in all of his joints.

But Pedro's path can be made easier. The Rice students are near completion of a four-year effort to make the wheelchair, which works with a paddling motion that does not require Pedro to turn the wheels of his manual wheelchair by hand.

Pedro's disability prevents him from pulling his arms in at the elbows – though he can push out. In addition, his wrists are locked in a rotated position.

"He can't operate a normal wheelchair because it would require him to grip the wheels, which he can't do," said Michaela Dimoff, a Rice junior and bioengineering major, and part of the Wheelin' and Dealin' wheelchair team that designed the new device. "He would be able to push them out, but once he's there, he's stuck."

The new chair has push-forward paddles instead of armrests. Pedro places his hands inside fabric loops and pushes to move. The spring-loaded arms do the work when it's time to pull his arms back to complete the cycle. "He pushes out and then relaxes, and the paddles come back," said Dimoff, who spent much of her summer break working on the project.

Pedro has a motorized wheelchair he uses at school, but at home, when his family is not available to push him in a standard chair, he's wheel-less. "He moves around his house by commando crawling with his forearms," Dimoff said.

The chair was built at Rice's Oshman Engineering Design Kitchen (OEDK) by a team that includes mechanical engineering majors Jared Elinger and Christina Petlowany and materials science and nanoengineering major David Smith, all juniors, and senior art history major Reed Thornburg. The parts were fabricated and assembled there with the exception of hub-mounted transmissions on each wheel that allow Pedro to go forward and backward and also give him a neutral gear.