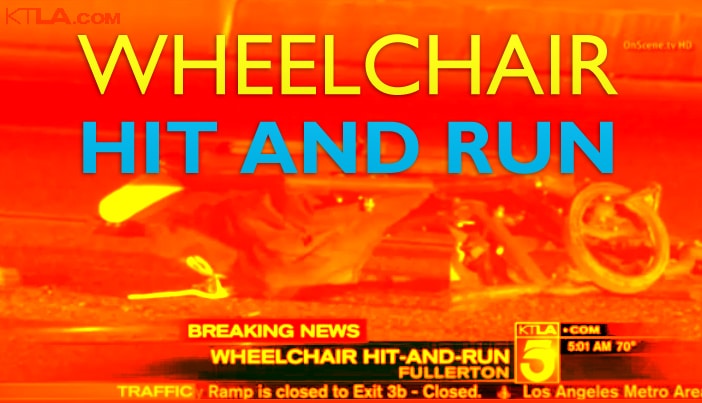 A man in a wheelchair was killed by a hit-and-run driver on a street in Fullerton about five months after the victim was struck in nearly the same location, police said Tuesday.

A man’s wheelchair is seen on a street in Fullerton after he was fatally struck by a hit-and-run driver on Monday, Aug. 18, 2014. (Credit: OnScene.tv HD)

Officers responded to the 2600 block of Orangethorpe Avenue, just north of the 91 Freeway (map), after a caller reported the crash at 11:58 p.m. Monday, said Sgt. Jeff Stuart of the Fullerton Police Department.

The victim was found in the middle of the road and was pronounced dead at the scene. He was not in a marked crosswalk at the time of the incident, according to authorities.

His name was being withheld pending confirmation from the county coroner’s office, police said.

Fullerton police released this surveillance video that showed the vehicle involved in a Aug. 18, 2014, hit-and-run.

He had been hit in the same location on March 3, when his blood-alcohol content was .36, or 4 1/2 times the legal limit for motorists, according to a police news release sent out Tuesday afternoon. In California, drivers are considered legally impaired when their blood-alcohol content is .08.

The victim had also been drinking when he was struck by a vehicle in Buena Park in 2008, according to police.