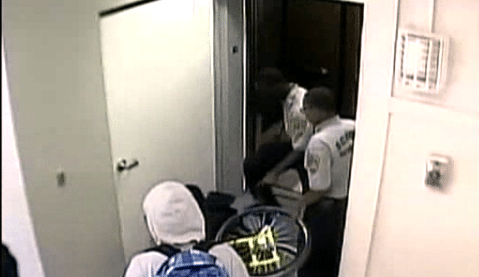 A second video has emerged allegedly showing an Oakland High School security guard abusing a student in a wheelchair, and a second guard will be placed on paid leave, authorities said Tuesday.

Marchell Mitchell, 23, has been fired and charged with child abuse for allegedly handcuffing, punching and dumping Francisco Martinez out of his wheelchair on May 18 in an incident that was captured on a school surveillance camera, said Troy Flint, Oakland Unified School District spokesman.

On Tuesday, school officials released a second video that captured another incident that happened moments earlier near an elevator. The video apparently shows Martinez slapping the hand of another guard, identified by the school district as Shalandra Cotton, before Mitchell angrily dumps the student sideways out of his chair and kicks him, authorities said.

Mitchell then drags Martinez into an elevator, where the confrontation continues outside of camera view.