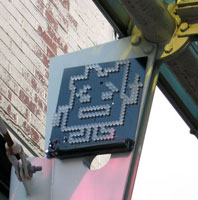 Boston has a high enough profile that it could reasonably be the target of a terrorist attack, and citizens and authorities are right to be cautious if they see a potential threat. Of course, Cartoon Network and its parent company, Turner Broadcasting, didn't consider this fact when they launched a guerrilla marketing campaign for the late-night animated show,Aqua Teen Hunger Force.

They hung small electronic circuit boards that displayed light-up depictions of the show's characters, and they thought bridges in the busy commercial district in Boston would be the perfect place for their pseudo-ads to be seen. And people did see them; a train passenger, seeing the board and wires sticking out, mistook them for bombs. She notified police, who blew up one of the devices and shut down highways and two bridges. Once the stunt was understood for what it was, two men were arrested for placing a hoax device and for disorderly conduct.

The Sanchez family, who owns a taqueria in California, seriously underestimated the appeal of their burritos — or the lengths people will go to get free food. When the restaurateurs put a sign in the window of Casa Sanchez offering free lunch for life to anyone who would tattoo its logo on themselves, they didn't think anyone would take it seriously. But people did. A few inked customers turned into 40 fans sporting the tattoos.

And then the owners did the math. If those people took full advantage of their lifetime commitment, coming in for an $8 lunch every day for 50 years, it would cost the restaurant $5.8 million. After running those astounding numbers, the Sanchez family decided to cap the number of people who could get the deal at 50, and interview potential life-time customers to see how hungry they seemed. The logo, in case you were wondering, is a little boy in a sombrero riding an ear of corn that looks like a rocket ship.

3. Hold Your Wee for a Wii radio contest

Radio stations are notorious for coming up with crazy contests to hook listeners and get publicity. KDND 107.9 in California thought they could get a little buzz for a contest where people would see how much water they could drink without going to the bathroom. They called it "Hold Your Wee for a Wii" and planned to give the winner the video game system.

They got a lot more buzz than they anticipated, though, when a contestant died from water intoxication. She had been the runner-up in the contest, and complained of her head hurting when she quit. Ten employees at the radio station, including the hosts of the show during which the contest aired, were fired. The woman's husband won a $16.5 million case against the station.

Everybody loves to hear about new world records, the stranger the better. Snapple, the juice and tea company, thought that breaking a weird record as appetizing as World's Largest Popsicle would be the perfect marketing stunt. They created the popsicle, 35,000 pounds and 25 feet tall, out of kiwi-strawberry Snapple, and shipped it in a freezer truck to Times Square in New York where they planned to erect it.

Despite all the careful preparation, the marketing team chose the first day of summer, when the temperature hit a balmy 80 degrees, to pull off this stunt. As the crane started to raise the giant popsicle, pink liquid rushed out, covering the street in sticky Snapple juice. The officials called off the attempt to stand the popsicle upright fearing that the structure had been compromised and would collapse, and fire trucks cleaned up the mess.

It's not often that you find a family that tries something outrageous just to get publicity, but in 2009, TVs across America were tuned in to watch the Heene family worry about their son who was flying through the air in a homemade helium balloon. Richard and Mayumi Heene called up authorities when the family's balloon was released and they feared their six-year-old was inside. Eventually, the boy turned up and said he was hiding in the attic.

But in an interview for Larry King Live, Falcon Heene said his parents had told him they were doing this for the show, meaning the reality show they hoped their publicity would inspire. The family wasn't offered a TV deal, and both adult Heenes received jail time for the hoax.
[btn link="http://www.businessinsurance.org/10-marketing-gimmicks-gone-wrong/" color="grey" size="size-m" target="_blank"]Read Full Original Article[/btn]