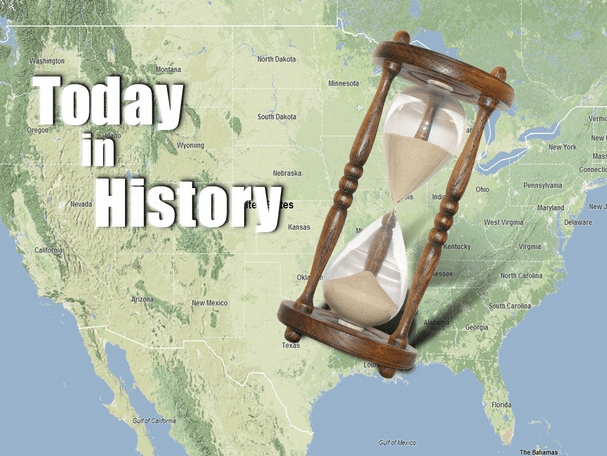 On March 19, 1979, the U.S. House of Representatives began televising its floor proceedings; the live feed was carried by C-SPAN (Cable-Satellite Public Affairs Network), which was making its debut.

In 1687, French explorer Rene-Robert Cavelier, Sieur de La Salle — the first European to navigate the length of the Mississippi River — was murdered by mutineers in present-day Texas.

In 1863, the Confederate cruiser Georgianna, on its maiden voyage, was scuttled off Charleston, S.C., to prevent it from falling into Union hands.

In 1920, the Senate rejected, for a second time, the Treaty of Versailles (vehr-SY') by a vote of 49 in favor, 35 against, falling short of the two-thirds majority needed for approval.

In 1945, 724 people were killed when a Japanese dive bomber attacked the carrier USS Franklin off Japan; the ship, however, was saved. Adolf Hitler issued his so-called "Nero Decree," ordering the destruction of German facilities that could fall into Allied hands.

In 1953, the Academy Awards ceremony was televised for the first time; "The Greatest Show on Earth" was named best picture of 1952.

In 1965, the wreck of the Confederate cruiser Georgianna was discovered by E. Lee Spence, 102 years to the day after it had been scuttled.

In 1976, Buckingham Palace announced the separation of Princess Margaret and her husband, the Earl of Snowdon, after 16 years of marriage.

In 1987, televangelist Jim Bakker resigned as chairman of his PTL ministry organization amid a sex and money scandal involving Jessica Hahn, a former church secretary.

In 2003, President George W. Bush ordered the start of war against Iraq. (Because of the time difference, it was early March 20 in Iraq.)

Ten years ago: President George W. Bush, on the first anniversary of the Iraq war, urged unity in the war against terrorism. Taiwanese President Chen Shui-bian (jehn shwee bee-ehn) and his vice president were shot and slightly wounded in an apparent assassination attempt on the final day of Taiwan's presidential campaign. The Army dropped all charges against Capt. James Yee, a Muslim military chaplain at Guantanamo Bay, Cuba, who had been accused of mishandling classified information.

Five years ago: An Austrian jury sentenced Josef Fritzl, 73, to life in a psychiatric ward for locking his daughter in a dungeon for 24 years, fathering her seven children and letting an eighth die in captivity as a newborn. Pope Benedict XVI, visiting Cameroon, told Muslim leaders that true religion rejected violence; the pontiff also held up peaceful coexistence between Christianity and Islam in the country as "a beacon to other African nations."

One year ago: Pope Francis officially began his ministry as the 266th pope, receiving the ring symbolizing the papacy and a wool stole exemplifying his role as shepherd of his 1.2-billion strong flock during a Mass at the Vatican. Insurgents carried out a wave of bombings across Iraq that killed at least 65 people. Harry Reems, 65, the male star of the 1972 adult-film classic "Deep Throat," died in Salt Lake City, Utah.