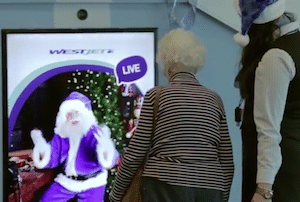 Usually if someone asks me what I want before a flight the answer is going to be something like, “The gift of no one kicking my seat back repeatedly during the flight” or “A free drink to get me through turbulence.” But a WestJet Santa Claus took it a few jolly steps further.

Passengers on two WestJet flights in Canada were asked to scan their boarding passes in front of a screen, which brought up a ho-ho-ho’ing Santa asking what they’d like for Christmas, reports CTV News.

And while kids answered readily with things like “A choo-choo train” and “An Android tablet,” Santa queried adults as well. “A big TV,” said one couple. “Socks and underwear,” said another man.

Then, while the flights were in the air, the discount airline’s staff went to work, scrambling to stores to shop for all the presents they’d taken notes on during the Santa interviews. Upon landing — ta da! Christmas dreams come true at the baggage carousel, where fliers were surprised with their personalized gifts.

“This year, we wanted to turn our holiday campaign into a tradition by doing something that’s never been done before,” said Richard Bartrem, WestJet Vice-President, Communications and Community Relations. “Inspired by the notion of real-time giving, we wanted to surprise our guests with meaningful, personalized gifts when they least expected them. Being able to show our guests how much we care with gift-giving, a tried and true holiday tradition, resonates with WestJetters as much as our guests.”