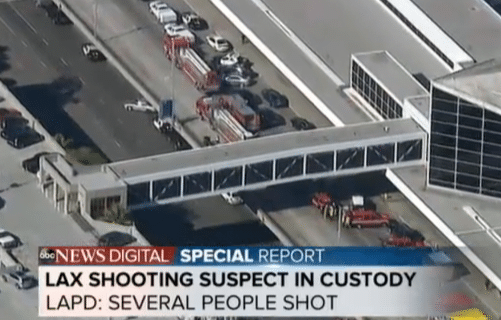 A gunman armed with an assault rifle entered a terminal at Los Angeles International Airport today, killed a TSA agent, penetrated deep into the terminal before he was captured by police.

Six other people were injured in the incident.

The shooting sent hundreds of passengers streaming out of the terminal with many fleeing onto the airport runway. Dozens of flights to and from the airport were delayed or cancelled. It also triggered a "tactical alert" for the Los Angeles Police Department.

The shooting began around 9:20 a.m. in the usually crowded terminal.

Police Chief Patrick Gannon said the shooter was armed with an assault rifle, blasted his way past airport screeners and "got back very far into the terminal." Police "tracked him through the airport... and engaged him," Gannon said, eventually taking him into custody.

The FBI quickly took a lead role in the invesitgation.

Witnesses described the shooter as a short, young, white man, carrying a long-rifle. One of the shooting victims was a TSA officer who died of his wounds. Six others were injured and taken to nearby hospitals.

"One arrived in critical condition and two are listed in fair condition," a spokesman from Ronald Reagan UCLA Medical Center said in a statement. An emergency physician said the patients suffered bullet wounds and other injuries. Three other patients were taken to other hospitals.

The LAPD said it was on "tactical alert due to a major incident" at the airport and the fire department said they were assisting at a multi-patient incident. Police said they believe there was only one gunman, but are sweeping the terminal and surrounding areas as a precaution.

An eyewitness, Leon Saryan, told ABC News Radio that a "fairly young" gunman with a rifle came down a corridor in Terminal 3 and shot perhaps 20 times.

A TSA officer holding Saryan's shoes was shot and wounded, he told ABC. Saryan said the gunman asked him, "Are you TSA?"

"He saw me. He looked at me with a quizzical look and said, 'TSA?' And I just shook my head. So he moved on," Saryan said. Terry Malloy, who was in the airport at the time of the shooting, told ABC News she heard at least three shots fired.

"I was sitting there, and I heard the alarm go off like when the door opens. I saw all these people charging down this ramp going in a million different directions. Everyone started looking at each other (like) what are we going to do, and I saw the ticket agent go behind the counter, and then I heard shots," Malloy said.

"I ran out to one of the piers," she said. "Someone opened one of the doors, and then we literally ran right onto the runway. We saw airport police charging down the runway with their doors open," he said.