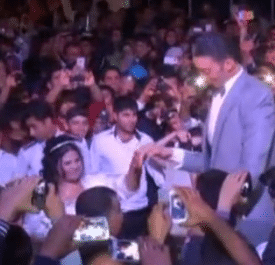 Standing at 8ft 3 (2m51), Sultan Kosen is the world's tallest man and a celebrity in his home country of Turkey.
He married his 5ft 8 (1.75m) wife, Marve Dibo in a wedding ceremony attended by Turkey's president Abdullah Gul and prime minister Recep Tayyip Erdogan.

Kosen has size 28 feet and had to have a wedding suit specially made to fit his large frame.
The farmer, who also holds the Guinness World Record for the biggest hands and feet, said he had given up on his quest to find love until he met Marve.

He said: "How unfortunate I could not find a suitable girl of my own size. My fiancée is over 1.75 metres tall, but I believe I've found the person for me."