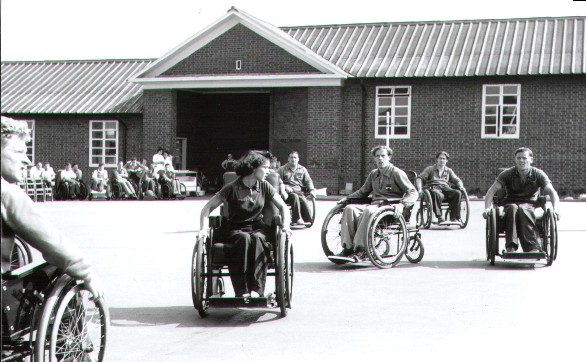 Wheelchair sports were initiated in the mid-1940's among disabled servicemen in veterans hospitals throughout the United States. These young, healthy and energetic men, with varying types of disabilities sought to regain the vigorous lives they had enjoyed prior to the onset of their disabilities. They bowled, swam and played table tennis, catch, pool, volleyball, waterpolo, softball, football, and basketball to meet their needs (28th National Wheelchair Basketball Tournament Program 1976:7).

This play movement grew to include extramural basketball contests between Veteran's Administration hospitals. Soon the movement had crossed the Atlantic; on July 28, 1948, Sir Ludwig Guttman directed Europe's first wheelchair sports competition at Stoke- Mandeville Hospital, Aylesbury, England, as an outgrowth of the use of sports in his treatment program.

In 1953, he invited a group of Dutch ex-servicemen to compete with the British veterans in the First International Stoke Mandeville Games (19th National Wheelchair Games Program 1975). By 1953 wheelchair basketball teams in the U.S. had been organized into the National Wheelchair Basketball Association 4 (NWBA) under the guidance of Timothy J. Nugent, and had crowned three national champions, the first in 1949.

Wheelchair basketball remained the only nationally organized wheelchair sport in the United States of America until Benjamin H. Lipton organized the First National (U.S.) Wheelchair Games in 1957 under the co-sponsorship of the Paralized Veterans of America and Adelphi University.