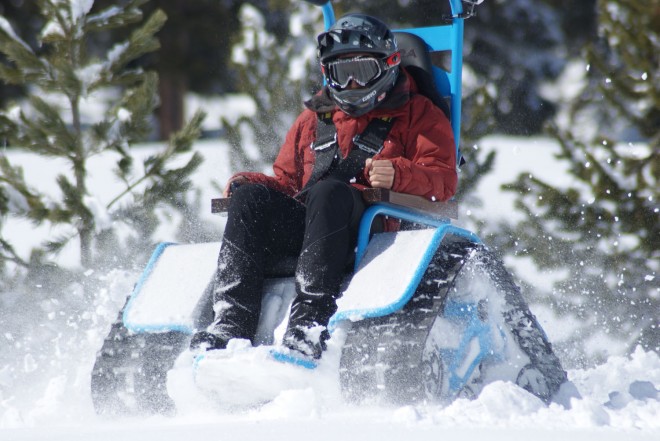 With winter on the way, it’s time to reassess what new, strange ways you can tackle the fluffy white stuff. Look no further than der Ziesel.

The unlikely offspring of a wheelchair and a tank, the Ziesel is the latest project from Mattro, an Austria-based mobility company that specializing in mounting off-road tracks to custom built vehicles for farming and construction. Now Mattro is putting its collective engineering skill to create an all-terrain, all-season, all-electric runabout that’s just at home on snow as it is sand, mud, and grass.

Two permanent magnet synchronous motors drive the tracks, putting out a peak of 21 horsepower and 30 pound-feet of torque to motivate the 460-pound Ziesel. A 6 kWh battery pack with integrated heating stores enough juice to keep the the beefy wheelchair running for 4 or 5 hours, although keeping it pegged at its top speed of 22 MPH will cut that time in half.

Everything is controlled through a joystick, so acceleration, braking, reversing, and steering are a single-handed affair, and three settings to tweak power output on the fly to suit the surroundings.

But more than just looking like stupid fun, the Ziesel would look perfectly at home parked outside your snow-covered chalet. There’s sculpted wood armrests, brushed metal mud guards, an option for metallic paint, and an attention to detail that only the Austrian’s could pull off. That level of fit and finish will cost you, though. Prices start at €21,710 (nearly 30 grand), and that doesn’t include the $1,500 charger and tow bar to turn it into a snowmobile.