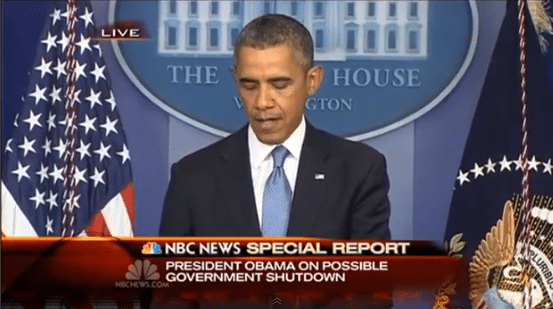 Congress adjourned early Tuesday morning without renewing funding for the federal government and the White House issued orders beginning the grim task of shutting down “nonessential” services across the nation.

Senators gave up first, adjourning soon after midnight, while House lawmakers stuck it out past 1 a.m. But with a middle ground proving elusive and senators refusing to negotiate over changes to the health law, the House too gave up and vowed to try again later in the day.

With no prospect of a deal to continue funding into fiscal year 2014, the White House budget office issued an order just before midnight to begin closing operations, sending 800,000 federal workers on furlough and leaving hundreds of thousands more employees required to report for work though without the guarantee of paychecks.

One program that didn’t shut down was the program at the center of all the GOP ire — Obamacare itself. The president’s health care overhaul is funded through other laws and, despite the shutdown, is up and running as of Tuesday morning. Americans without health insurance can now go on state-based exchanges to begin shopping for insurance, often with the benefit of government aid.

The debate raged even as Congress careened through the deadline, with House Republicans sending repeated proposals over to Senate Democrats, though never the one plan senators demanded: a funding bill with no strings attached.

President Barack Obama makes a statement on the budget battle from the ...more >

“It is now midnight and the great government of the United States is now closed,” Rep. Louise Slaughter, New York Democrat, said on the House floor at the ignominious deadline passed.

President Obama upped the pressure, releasing a video message early Tuesday morning that he recorded to American troops, in which he blamed Congress for letting the military down.

“It has failed to pass a budget and, as a result, much of our government must now shut down until Congress funds it again,” he said.

A last-ditch House plan to request formal talks with Senate Democrats was met with derision by Senate Majority Leader Harry Reid, who said there will be no negotiations with the threat of a shutdown still looming.

At stake were most basic government operations. National parks were preparing to shutter, federal agencies were notifying about 800,000 nonessential employees who will be furloughed, and officials warned that there would be delays in processing new benefit applications for a whole range of programs.

Still, the list of what is deemed “essential” and remains in effect was longer: air traffic controllers, Border Patrol agents, the military and federal law enforcement would remain on the job, though with the exception of the troops, they would do so without paychecks — at least in the near term.

House Speaker John A. Boehner emerged after a final House vote to say he felt he and his troops had done their best to keep government open while trying to also make a dent in the health care law.

“We are hoping the Senate will take our offer,” he said in a brief press conference.

House Democrats, though, said the GOP’s push for talks was a smokescreen to cover the fact that Republicans wanted to force a shutdown.

Republicans said that wasn’t true, and pointed to the three separate proposals they’d already sent to the Senate to cancel, delay or otherwise change Obamacare, only to see each of them defeated by a unified Democratic caucus in the Senate.