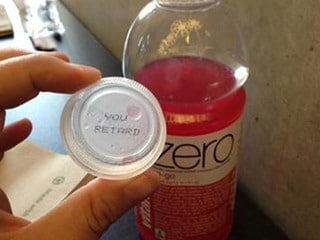 Coca-Cola is in hot water with a consumer whose daughter opened a Vitamin Water bottle with the message “You retard” on the cap. The man has another daughter with cerebral palsy.

The messages were part of a Coke promotion in Canada that randomly paired English and French words that together were supposed to make up funny gibberish phrases. But the words were only vetted in French, not English.

“Retard” in French means “late.” But Doug Loates, who does not speak French, didn’t see the humor.

His 11-year-old daughter, Fiona, has cerebral palsy and is fed through a feeding tube. His other, older daughter got the “You retard” message on a Vitamin Water bottle cap during a restaurant visit.

This made Loates write a letter to the Coca-Cola board of directors to express how hurtful the message felt to Fiona’s family.

“She is cognitively delayed. Fifty years ago they might have called her retarded. But we know better now, don’t we?” Loates wrote. “The ‘R’ word is considered a swear word in our family. We don’t use it. We don’t tolerate others using it around us. We are over-sensitive, but you would be too if you had Fiona for a daughter! Can you imagine if she had opened this bottle???”

Loates compared it to calling someone the “N” word.

“What would you do if you opened up your bottle of Vitamin Water and on the bottom of the lid it read “YOU RETARD”? Think about it. I bet you’d be pissed if you had a Fiona in your life,” he wrote.

He said he’d been drinking Coke since he was nine and got his first newspaper route, but now calls himself an “ex-Coke drinker.”

Coca-Cola told Metro that the unfortunate Mad Lib word pairing was unintentional, and that the random words had been reviewed for offensive meanings in French but not in English.

“We did not mean to offend at all,” a Coca-Cola spokesperson told Metro. “We are certainly very apologetic for this oversight.”

The spokesperson said Coca-Cola has cancelled the rest of the promotion and destroyed the remaining caps that were part of it.