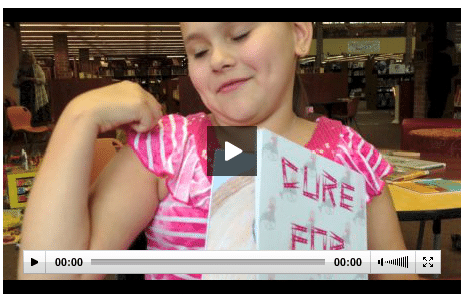 When nine-year-old Homewood resident Chloe Ochoa had a hard time finding books with kids in wheelchairs, she decided to fix the problem by writing one herself.

The young author is afflicted with Spinal Muscular Atrophy (SMA) type III, a degenerative neuromuscular disease. Because of it, she cannot walk on her own, and her arms are also beginning to show signs of atrophy. But despite her challenges, Chloe has an infectiously positive attitude. It's how she became the 2009 Muscular Dystrophy Association's Illinois Goodwill Ambassador.

Chloe's self-published book is called Chloe on the Clothesline. She says her grandmother helped her come up with the title and her aunt helped with the photos—many of which are from her travels to France. Mom helped out too, but most of the illustrations were done personally by Chloe. All proceeds from the book go directly to Cure for Chloe.

After being released in June, Chloe on the Clothesline has already sold over a hundred copies on Amazon.com. You may have even seen a special copy around the Homewood library (where she's been a loyal patron for years), autographed by Chloe, herself!

Here's a preview of the book from her website:

"Chloe's day starts out like any other as she helps her family around the house. But things take an interesting turn when she gets hung up on the clothesline with the other clothes!"

You can check out the autographed copy of Chloe on a Clothesline at the Homewood Public Library, or order your own copy online.

Want to donate to Cure for Chloe? Monetary donations can be made to: