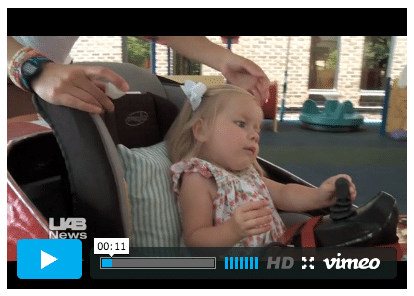 When Jennifer Sheppard learned that University of Alabama at Birmingham School of Engineering students created a motorized wheelchair for 1- to 3-year-olds, she was eager to let her daughter give it a try.

Mary Graham, 2, was born with scoliosis, hip dysplasia and muscular dystrophy. Sheppard’s dreams of her daughter running and jumping were replaced with plans for a life seated in a clunky wheelchair.

After getting in a one-of-a-kind, car-shaped wheelchair created as a senior project by undergraduates in UAB’s biomedical engineering Capstone Design Course, Mary Graham experienced the playground like never before. The wheelchair is equipped with a joystick and a kid-friendly paint job, and it is at ground level so that toddlers do not loom above their peers. It also has an override system with which parents can stop the child’s movement at the flip of a switch.

“It is such a great option for children who may not be mobile, instead of a clunky wheelchair,” Sheppard said. “It makes it fun so that they can explore, and that helps them cognitively.”

For more than 15 years, and with the assistance of a National Science Foundation grant, engineering seniors have partnered with various community agencies including United Cerebral Palsy, Children’s of Alabama and others, to create biomedical devices to aid people with disabilities. Students work with their client to identify an engineering need. They develop a market analysis and business model then create a prototype.

“It’s a chance to solve a real-world engineering problem,” said Alan Eberhardt, Ph.D., professor and associate dean of the School of Engineering. “The students spent the past four years working in textbooks and computers. The Capstone Design Course allows them to put their knowledge to task.”

This past year, a group of undergraduates – Ryan Densmore, Shelby May, Dan McFalls and Stephen Mehi – constructed the wheelchair for the Bell Center, an early intervention program for infants and toddlers with special needs. The Center, where Mary Graham is a client, needed a mobility device to train young children to use a powered wheelchair; it was using a borrowed one.

The students spent countless hours in the design lab coming up with a model that would help the children, as well as meet specific design codes and regulatory standards. With a budget of $1,500, the students had to be inventive, scavenging parts from the power system of an old wheelchair.

“The process of building it has been the best part of my college education,” said Densmore, a senior from Morris, Ala. “The entire project was an opportunity to apply all the knowledge I have accumulated over my four years at UAB.”

“It is teaching children that they can be independently mobile, especially for those who have never experienced that,” she said.

The students’ design is being reviewed for its potential marketability. If translation into a viable business venture is feasible, the project may be incorporated into a new engineering graduate program.

“It is a great feeling to help someone, especially children,” Densmore said, adding that knowing it would be at the Bell Center made him proud. “I cannot think of a better place for it.”