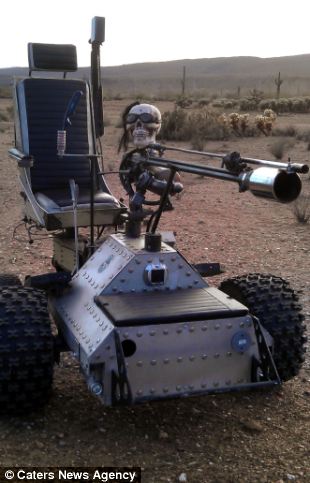 Dubbed the the Lord Humongous, Lance, 52, spent $1,000 (£645) and a month building the customized wheelchair with a flamethrower out of an electric golf cart, a helicopter seat, all terrain tires and old dental machines.

Lance, from Phoenix, Arizona, said: 'I love fire and wheelchairs so I thought why not put them together.

'The Lord Humongous wheelchair idea started when I found a rescue helicopter seat in the Tucson Aircraft boneyard.

'As soon as I spotted it I knew it would be the perfect fit for my flame throwing chair project.

' I would like to see some street gang member mess with someone in one of my chairs.'

Lance, who funds his projects by working as a dental equipment engineer, added: 'Almost every wheelchair user I have met loves my work and says I am on the right path.

'It keeps my dreams alive building these chairs and getting them out to deserving people who need them.

'Why not have a fully functional wheelchair with a flamethrower and have it show your personality just like a teenager with their first car.'

His unusual interest was sparked by an appearance on British BBC2 show Robot Wars where he spent time talking to staff in the special effects department at the show's studios.

He said: 'They showed the stuff they were building in their shops and it had a big impact on how I design.

'I began building with ideas I had in my head and not being concerned with what others were doing or thinking about.

'When I am not working I spend all of my time in the garage designing and building custom wheelchairs and one of a kind machines.

'In the past I was able to donate a few chairs each year to people who really need them so hope to build cool machines full time for deserving people some day.' 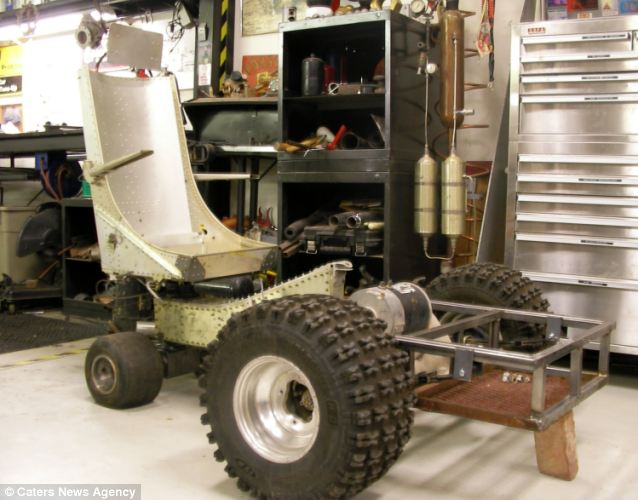 Work in progress: The chair is pictured in Lance's workshop while he built it. It took a month to put together 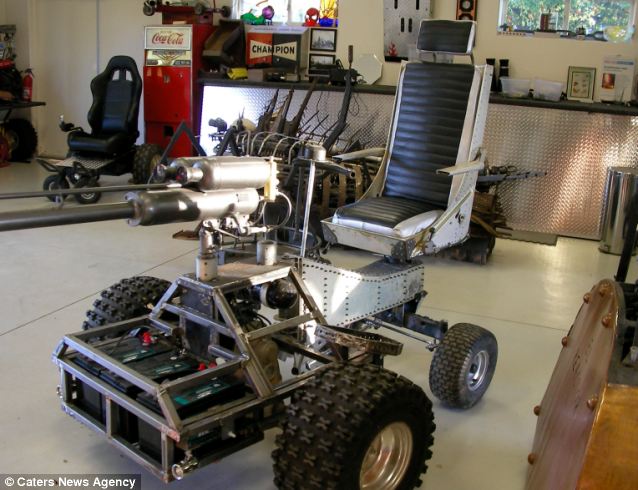 Ready to go: The customised chair pictured in the workshop ready for a test drive