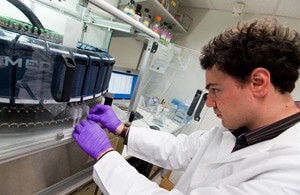 The study of science changes everyday with the growing prevalence of technology and continuous progress being made in a variety of different fields in science. Scientists have discovered new ways to approach, and information relating to, medicine and the human body.

Pharmacology is studied by scientists who help to determine how drugs and different types of medication may heal and aid the body in resisting diseases and infections. Pharmacology is broken down into many divisions pertaining to a variety of subtopics, including a drug's affect on living cells to the chemicals that may be dangerous to our bodies. The information and links provided will ensure a better understanding of pharmacology and the way it has developed and grown in it's significance in recent years.

Pharmacology is the scientific study of drugs, including what different types of drugs do, how they work, and specific types of drugs that are used for different ailments. The study of pharmacology also relates to how the human body adapts and reacts to different drugs. Pharmacology and Pharmacy, while they may uphold some of the same principles, are still very different studies.

Pharmacy is the scientific study of preparing and dispensing medications for human consumption. Pharmacy reports the chemical interactions between a given medication and the human body. Both studies share similarities in reporting the study of physiological reactions of the body to a medication. Another aspect within the study of pharmacology is how drugs are metabolized within the body.

Oswald Schmiedeberg is credited as the founder of today's modern pharmacology. Schmiedeberg showed that the vagus nerve and heart were both effected by muscularity. His studies launched the pharmaceutical beliefs in Germany up until World War II. Prior to this mankind used natural elements, including animal parts and plants to treat injuries and wounds. In thebirth and creation of pharmacology, Germany's Friedrich Wohler changed the theory of that time that stated living compounds were only established in organic cells. Wohler became known for his works and established the first compound of pharmacology.

There are several distinct divisions in the field of pharmacology, each with a specific focus. Clinical pharmacology addresses the scientific clinical use of drugs. Neuropharmacology is the study of how drugs affect the nervous system. A third division is characterized as the study of pharmacogenetics, which means the testing of genes and how they interact with drugs, while pharmacogenomics relate to combining gene information to a drug's damage organism. Pharmacoepidemiology studies drug substances and the way they affect numerous groups of people. Toxicology also falls into the greater field of pharmacology and addresses chemicals and how they affect living organisms in the body. Theoretical pharmacology is a study of theory or an idea relating to the study of drugs.Posology deals with the amount of drugs capable for the body. Pharmacognosy studies the properties of drugs in the natural stages such as the medicinal benefits of plants and other types of organisms. The last division is behavioral pharmacology which studies the way drugs affect the way a person acts or behaves. As one can see, there are many different branches of pharmacology, each is very specialized and is creditedwith a variety of different contributions to the scientific community.

The study of science is constantly changing and progressing at an unprecedented rate of growth. The accelerated rate at which the field of sciences progresses poses unique challenges to the scientific community as we continue to develop “before their time” methods of research and explore the unknowns of the science community. Scientists continue to perform numerous tests and experiments on newly developed drugs to analyze their effects on the human body and their viability as quality medical resources. A variety of different reviews and analysis have been created within the medical community to critique experiments on the effects of experimental drugs to protect the global community and to ensure that harmful drugs are unknowingly prescribed by physicians.

Medicine first began with the practice of using plants and animals to heal wounds, injuries and sores, from the earliest development of the New Stone Age Period. But over time, it has morphed into the form of pills, pure liquid and other substances. An example of the profound pharmacological developments that have taken place in recorded history is the first study that proved that blood maintained a continuous flow, which came from the Chinese emperor Huang-Ti. It wasn't until 750 BCE whenSusruta , a Hindu surgeon first practiced eye surgery. Long before the Food and Drug Administration (FDA) approved such procedures and their accompanying drugs, they were being used medicinally, a testament of the commitment to experimentation and development that has been evident in medical community. All drugs are not legal for use due to safety rules and regulations, and ways it could affect the human body. The Prescription Drug Marketing Act of 1987 ensures the safety of prescription drugs, while the 1988 Anti-drug Abuse Act prohibit abusive drug use that may harm the body. Regulations of safety issues are done from inspections and properly using labels approved by the FDA.

One of the challenges that the medical community has consistently encountered is that each human body reacts differently to each drug introduced into the system. If a patient reacts unusually or out of the scope of the anticipated reaction, it would be very important to document the drug reactions and seek treatment immediately. Further testing may be necessary to determine the cause of the abnormal reaction and to detect any possible allergy. If you recognize symptoms you're having that relate to some diseases or illnesses after taking drugs, then it's best to document the drug reaction and seek medical attention. To prevent patients from experiencing unanticipated side effects to medication, numerous organizations and publishers have released drug indexes and guide books to help both medical professionals and consumers better prescribe and understand the complexities behind each manufactured drug. Understanding the chemistry, the intended use, and the effects of experimental drugs is critical to achieving a positive outcome and correctly providing medical attention to patients.