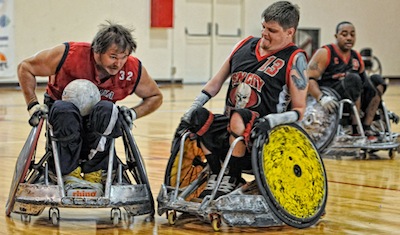 Quad rugby is a sport that was developed for individuals and athletes who have upper body disabilities. The event typically takes place on a basketball court in which the players are in wheelchairs. Originally known as “murder ball”, quad rugby has transformed into a popular Paralympic sport practiced in over twenty countries. Established in 1993, the sport of quad rugby is governed by the International Wheelchair Rugby Federations.

Wheelchair, or quad, rugby was developed in 1976 in the country of Canada by five Canadian wheelchair athletes. Jerry Terwin, Randy Dueck, Chris Sargent, Duncan Campbell and Paul LeJeune created quad rugby to be a sport for quadriplegics. The sport required its players to dribble and shoot baskets. Each team is made up of four players and allowed unlimited substitutes. Quad rugby is played with a volleyball which is carried, batted or passed with the object of the game being to get the ball across the 20 meter goal. Chair contact with other players with or without the ball is encouraged and the player with the ball must dribble or pass the ball in intervals of ten seconds.

In 2005, a documentary film called ‘Murderball’ was directed by Henry Alex Rubin and Dana Adam Shapiro. The Oscar nominated film focuses on the rivalry between Canadian and U.S rugby teams. The low budget film is about quadriplegics who play the sport of quad (wheelchair) rugby which lead up to the 2004 Paralympics games. The film was nominated in the 78th Academy Awards for ‘Best Documentary Feature’. The major international quad rugby competitions are held in Zone Championships, or each odd numbered year. In even numbered years, the World Championships are held, opposite the Paralympics Games and the Summer Paralympics Games.

Quad rugby is a competitive, fast-paced sport for individuals with quadriplegia. There are over 50 hard-hitting quad rugby teams in the United States alone and over 20 international teams, making this wheelchair sport one of the most popular Paralympic events.

This article is brought to you by 1800wheelchair; we offer handcycles & sports wheelchairs.