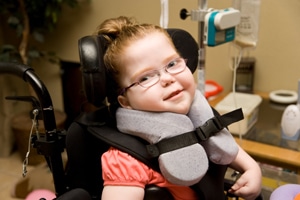 Cerebral palsy (CP) is a group of conditions caused by medical abnormalities in the development of a fetus or the early life of a child. These lead to damage or delayed development in the brain. The disorder is permanent and, though it does not worsen with age, the level of functionality of a person with cerebral palsy varies widely: in some cases, effects may be very minor, while in others, movement is impaired to the extent that a wheelchair is required. Common complications associated with CP vary by the type of CP disorder but can include vision problems, seizures, learning disabilities, and issues speaking, writing, and performing other tasks related to motor control.

Cerebral palsy is generally caused by developmental issues during pregnancy which lead to abnormal conditions in the brain. During the birth process, lack of oxygen caused by premature delivery or delivery-room errors can cause brain damage that facilitates cerebral palsy. Cerebral palsy can also be caused by recognizable brain injuries sustained by the developing child up to an early age after birth. Medical research continues to uncover the many risk factors that may be associated with CP cases. Effective maternal care, ensuring a healthy diet and environment for the mother, is vital for ensuring that preventable cases of CP do not occur.

Cerebral Palsy at Medline Plus: Information from the online medical encyclopedia of the National Institutes of Health.

What Are The Causes of Cerebral Palsy?: A compendium of information on a huge number of topics related to CP, with a particular focus on the health and future of children with the disorder, from the nonprofit organization 4MyChild.

Cerebral palsy comes in several types, which may be associated with muscle tone or specificbody parts. Those associated with muscle tone include: spastic CP, where abnormally high muscle tone causes problems with movement, usually in the legs and hips; ataxia, which is marked by involuntary muscle movements; athetoid, which prevents sufferers from maintaining a fixed muscle position (for example, grasping and holding); and mixed, where symptoms of both spastic and athetoid CP occur.

Cerebral Palsy: Hope Through Research: Detailed information from the National Institute of Neurological Disorders and Stroke, including facts on the causes, risk factors, warning signs, and types of CP.

Definitions and Accommodations for Cerebral Palsy: Information on the types of CP and how to accommodate and interact with severe sufferers. From Kentucky’s Office for the Americans With Disabilities Act.

United Cerebral Palsy Association: Nonprofit organization that offers a nationwide network of affiliates aimed at expanding the rights, freedoms, and opportunities of those with cerebral palsy.

Cost of Cerebral Palsy: Information on the human and economic impact of cerebral palsy, presented in the form of an academic report composed by the Environmental Protection Agency.

Certain types of cerebral palsy are associated with specific body parts rather than with the general condition of the muscular system. These types include: quadriplegia, in which all four limbs suffer severe motor dysfunction and a general inability to work together; hemiplegia, in which the limbs on one side of the body are severely affected, with the impact more pronounced in the digits; and diplegia, which causes problems with muscle development, balance, and coordination in both legs.

National Organization for Rare Disorders: Information and a large compendium of quality Internet resources for sufferers of cerebral palsy and other movement disorders.

PubMed Calculated Links: Publicly-accessible database of published scholarly research on cerebral palsy, from a database of the U.S. National Library of Medicine.

Cerebral palsy can create severe problems that persist throughout the sufferer’s day-to-day life. Many cases of CP involve at least some involuntary movement that can disrupt normal activities. Others involve a persistent lack of muscle control that makes walking, standing, or manipulating objects difficult or impossible. Those with CP may have problems talking, eating, or breathing. They may also have learning impairments, seizures, or other major neurological problems. Those with the most serious cases of CP require intensive, lifelong medical attention, and cannot effectively care for themselves independently due to cognitive disruptions or reliance on medical equipment.

Cerebral Palsy Family Network: Information on living with CP and networking with other sufferers and their families. Aimed at parents and planning long-term care for children with severe CP.

Living With Cerebral Palsy at NOAH: Verified Internet resources about dealing with CP complications at various stages of life. From New York Online Access to Health, a nonprofit information service.

Whispers of Hope: Living With CP: Even more electronic resources for networking and overcoming life challenges related to cerebral palsy.

There is a vast and growing body of products aimed at restoring independence and fullness of life to sufferers of CP. Wheelchairs are available that can accommodate the needs of a wide variety of CP patients; walkers, canes, and other assistive devices are also available. For those with impaired fine motor control, small objects such as pencils and silverware have been designed in accessible forms. Patients who are unable to speak may use communication devices that interpret the movements of the throat or the input of a small keyboard in order to create recognizable vocalizations – much in the same way as noted physicist Stephen Hawking. For all of the daily challenges associated with CP, in whatever form, some assistive measure exists or is being researched.

Ontario Federation for Cerebral Palsy: Information packet that covers a variety of topics related to all aspects of living with CP.

Cerebral Palsy Accessories and Equipment: Impartial, nonprofit review website for all categories of assistive equipment related to the lives of CP sufferers.

Those with cerebral palsy can benefit from several kinds of therapy. Physical therapy focuses on helping patients attain greater muscle control, coordination, and balance through basic physical tasks. Using physical therapy, it may be possible to enhance a CP patient’s ability to walk or balance. Speech therapy is used to overcome problems with enunciation, including secondary issues such as lisping. Occupational therapy focuses on the improvement of cognitive function through a variety of simple tasks, and recreational therapy contributes to the development of social and independent living skills in recreational environments.

Center for Cerebral Palsy Spasticity: Information on treatment and the latest research from an advanced medical center at the Children’s Hospital of St. Louis.

Cerebral Palsy Guide for Care: Excerpt from an extremely detailed medical analysis (much of which is available on the same site) focusing on diagnosis and care for those with CP. Somewhat technical but extremely thorough.

Cerebral Palsy Treatment Overview: One portion of an extremely comprehensive guide from the University of California, San Diego, offering information on cerebral palsy from diagnosis to late-life treatment. This section focuses on treatment options for lifelong mitigation of some symptoms, with particular depth of information on physical therapy.

American Academy for Cerebral Palsy and Developmental Medicine: Large amount of information from the frontiers of the latest CP research.

Research Resources: Collection of resources on the use of music therapy in treating complications related to CP.

Cerebral palsy is the focus of a large amount of medical research every year. Though much of this research deals with younger patients, more and more attention is being paid to CP sufferers as they age and seek fuller opportunities and more integration with the rest of society. Living with CP is a daily challenge, but paths to a richer and more fulfilling life are being found. There is not, and may never be a “cure” for CP, but greater understanding by clinicians and the daily success stories of those who overcome their limitations are making.

This article is brought to you by 1800wheelchair; we offer pediatric bath safety, adaptive strollers, & pediatric wheelchairs.