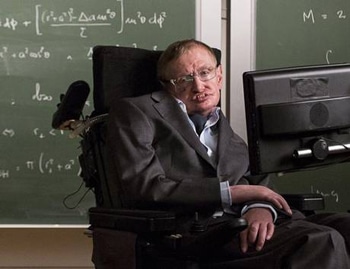 When life throws you a lemon, you don’t sulk, complain or feel sorry for yourself. Instead, you just make lemonade. You make the most of the situation that is handed to you, just as Stephen Hawking has done in his lifetime of accomplishments, achievements and deeds while being severely disabled.

Mr. Hawking is an extraordinary human being who defeated all odds and stood his ground in maintaining his sense of humor and integrity, despite his physical limitations. Society puts him in the same category as Albert Einstein and Isaac Newton for his knowledge and experience in Physics, Mathematics and Cosmology. He is a man defined not only by his disability, but by his accomplishments and his contributions to science.

Stephen Hawking is a Physics professor at Cambridge University, located in Cambridge, England. His expertise and passion dwells in that of Cosmology, the study of the universe. He was born during World War II, and given the name of Stephen William Hawking on January 8, 1942 in Oxford England. Although it was his father’s dream for his son to become a doctor like himself, Stephen chose not to follow in his father’s footsteps for his love was in Mathematics, Physics, Science and Astronomy.

As a boy growing up, he was enrolled at St. Albans at the age of eleven. Though today, he is noted for his work as a researcher, which details a lot of reading and analyzing, as a child Stephen’s reading was at a low level. He found it to be more satisfying trying to figure out how things work, than it was reading text books. Figuring things out on his own opened doors that put him on his career path.

Stephen admits that as a child his first challenge was that of being physically uncoordinated. This physical problem led him to shy away from activities dealing with sports. However, the minor set back did not keep him from entering competitions in rowing and coxing at the age of seventeen. It was at the age of twenty-one that he began noticing some more changes in his coordination, more accidents would occur, like falling for no apparent reason.

After many tests and hospital visits, he was diagnosed with an incurable disease that would eventually leave him permanently disabled. Today he lives his life confined to a wheelchair and speaking through a voice synthesizer, because the disease has claimed his voice and destroyed the muscles in his body, which leaves him paralyzed. The incurable disease that has taken over his body is Lou Gehrig’s disease, or ALS as it is sometimes called.

The defining man not only loves doing research, giving lectures and interviews. He has a passion for writing as well. He is an author whose contributions include book publications and essays. His first book published is entitled: A Brief History of Time which was followed by two more published works: Black Holes and Baby Universes and Other Essays.

Another book was published in 2001 entitled The Universe in a Nutshell. All of which, shows his enthusiasm and interest in Cosmology. Mr. Hawking has proven that he is unstoppable, even in a wheelchair.

Hawking is a man of integrity, strength and determination. He is also humble, because regardless of his accomplishments while living with his disability, he still claims that he is no genius. Though in a wheelchair, Hawking is married and has a family. Besides his accomplishments in research, he has won recognition for being on TV Programs such as Star Trek: The Next Generation and being entertained at the White House.

With all the things that this man has accomplished, it goes to show that a disability may slow you down and interrupt your life, but it doesn’t have to mean that your life is over. You can still do great things and prove your worth.

Below are lists of links that will lead to interesting reading on the life and accomplishments of Stephen William Hawking, the man who didn’t let being disabled stop him from living.

A Glimpse into His Personal Life

An Interview with Stephen Hawking

An Essay on Hawking

This article is brought to you by 1800wheelchair - The Power Wheelchair Store.

Please fill out the form below to receive information regarding your inquiry. You can give us a call at 1-800-80-KARMA, or please bare with us while we reply to your inquiry.