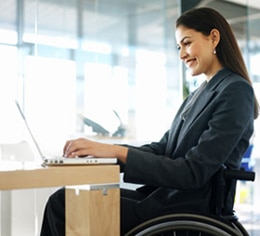 Over the course of history, disabled people have had to face adversity in their everyday lives. Because of these difficulties, the U.S. Government adopted the Americans with Disabilities Act in 1990.

The Americans with Disabilities Act was signed into law on July 26, 1990 by President Bush. The ADA is a wide-ranging civil rights law that prohibits, under particular circumstances, discrimination based on a disability. It affords related protections against discrimination to Americans with disabilities as the Civil Rights Act of 1964, which made discrimination based on race, religion, sex, national origin, and other characteristics illegal. Disability is defined by the ADA as "a physical or mental impairment that substantially limits a major life activity." The determination of whether any specific condition is considered a disability is made on a case by case basis. Certain specific conditions are barred as disabilities, such as current substance abuse and visual impairment which is correctable by prescription lenses."

The ADA has subsequently had additional amendments to the Act in September 2008, which went into effect on January 1, 2009. The ADA Amendments Act of 2008 gave workers some broader protections than what was in the original Act.

The ADA was a very broad piece of legislation that covered various aspects for the lives of disabled people. In addition to provisions for disabled workers, the ADA also gave guidance on public entities and transportation, public accommodations and commercial facilities, telecommunications and other provisions. The ADA not only gave guidance for implementation, but also provided for anti-discrimination provisions.

While the ADA’s requirements to level the playing field for all workers was difficult for employers to implement, it has provided for ways to give all workers the opportunity to earn a living. In regards to workers, the ADA states that a covered entity shall not discriminate againsta qualified individual with a disability. This applies to job application procedures, hiring, advancement and discharge of employees, workers' compensation, job training, and other terms, conditions, and privileges of employment.

The Americans with Disability Act of 1990 and subsequent amendments have given disabled workers the chance to work in a safe and non-discriminatory environment. To learn more about workers and the ADA, we have gathered a collection of resources: