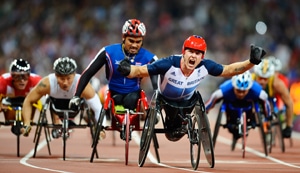 Sir Ludwig Guttmann founded the games in 1948. He wanted to start a sport that involved veterans from World War II. Within a few years, veterans from other nations joined in the competition. By 1960, a formal games strategy was formed, and the once informal competition garnered the official name of the Paralympic Games. They Games are held every two years, with both winter and summer Games being staged, and are held in the same host city and venues as the Olympic Games.

There are currently 26 different sports on the Paralympic Games program – 21 summer and 5 winter. Winter sports include alpine and cross country skiing, biathlon, wheelchair curling and sled hockey, while summer sports feature many familiar to Olympic Games fans, including track & field, swimming, cycling, Three sports are specific to the Paralympic Games - wheelchair rugby, boccia and goalball, a sport for athletes who are blind or visually impaired. Two new sports, paratriathlon and canoe, will make their Paralympic Games debut in 2016 in Rio de Janeiro.

Athletes are categorized by their disabilities and these categories are then classified based on the sport being played. The athlete categories include amputee, cerebral palsy/traumatic brain injury/stroke, wheelchair-users, blind/visual impairment, and les autres. Les autres is the French word for “the others” and this category includes all athletes that don't fit into the other five categories. Some well-known Paralympic athletes include,Oscar Pistorius, April Holmes, Erin Popovich, Rudy Garcia-Tolson, Matt Scott, Chris Waddell, Sarah Will and Jessica Long. Then there is Ragnhild Myklebust of Norway who holds the record for the most medals ever won at the Paralympic Winter Games. Over the course of her career, she won 22 medals, and 17 of those were gold.

Over the years, there have been a few controversies that have arisen with the Paralympic Games. In 2000, some non-disabled athletes from Spain entered the Games and played on the basketball team for athletes with intellectual disabilities. This prompted the International Paralympic Committeeto suspend all intellectually disabled athletes from Paralympic competition until further evaluation. The committee claimed it would re-evaluate this after the Beijing Games, but no final decision has been made. Other controversies that have arisen include the problem of doping. During the Sydney Games in 2000, 14 athletes tested positive for doping, and 10 of those were participating in the powerlifting competition. Despite its controversies, the Paralympic Games are a great way for those with physical and visual disabilities to shine and prove their athletic greatness.

For more information about the Paralympic movement, please refer to the following websites:

This article is brought to you by 1800wheelchair; we offer handcycles, sports wheelchairs, &beach wheelchairs.