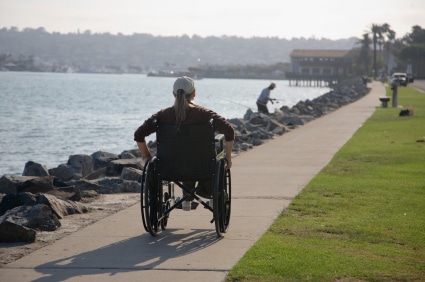 "Christopher Reeve was a wheelchair-bound actor."

To those familiar with his career before he suffered the accident which lead to his paralysis, this would be a gross misrepresentation of a popular and beloved figure. Why then, is it acceptable to characterize others in similar ways - even if they have lived with a disability from birth?

People who live with disabilities face social challenges daily, and they may feel uncomfortable when ordinary people refer to them as “disabled people”. Some basic consideration of the language that we use to talk with and about people with disabilities can make a substantial difference in the atmosphere within a workplace, classroom, social situation, or even in casual encounters. The characterization of people with disabilities as people first and foremost can be the difference between recognition and dismissal of a person who has ability, interests, and ambition. For instance:

Many educational institutions that serve young children encourage people first language in order to establish an environment of respect and inclusion early in a child's social development - both for the sake of children who live with disabilities, and for those who do not.

Here are links to more information about people first language:

This article is brought to you by 1800wheelchair.